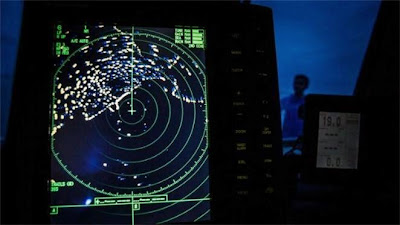 Caption: A navigational radar on Indonesia's National Search and Rescue boat shows details during a search in the Andaman sea area around northern tip of Indonesia's Sumatra island for the missing Malaysian Airlines flight MH370 on March 17, 2014.

NEW DELHI, (Bernama) -- An Indian IT analyst has found a satellite image of a large aircraft flying low over the Andaman Islands on March 8, the day when a Malaysian airliner disappeared on a flight from Kuala Lumpur to Beijing, according to The Hindu newspaper.

Anoop Madhav Yeggina, 29, believes the image is that of the lost Malaysia Airlines (MAS) Boeing 777-200ER which was carrying 239 people on board as Flight MH370, the daily said.

The techie is among the thousands of people from across the globe involved in the 'crowd-sourcing' to find the missing plane which veered off course towards the Indian Ocean after shutting all communication links as it was flying over the South China Sea.

'Crowd-sourcing' refers to obtaining information or input into a particular task or project by enlisting the services of a number of people, either paid or unpaid, typically via the Internet.

The Hindu reported that Anoop had been scurrying through innumerable images of DigitalGlobe Satellite QB02 over the past few days until he stumbled upon an image which almost took his breath away.

He uploaded his 'discovery' along with a write-up on the CNN website on March 14 and, since then, received more than 16,000 views followed by many comments from viewers.

“I am confident that the image is that of the missing plane because of many reasons. First giveaway is the fact that the image was captured just above a forest and very close to the Shibpur airstrip of the Andaman Islands.

"The airstrip is exclusively used by the defence forces with no permission for civilian aircraft in this area.

"A close look at the image will reveal if it is flying extremely low so much so that the clouds are above it, which suggests it was done to avoid detection by radar.

"Most importantly, the standard scale measurement and colour of the missing plane matches with that of the plane in the image,” he was quoted as saying in The Hindu report.

Anoop wished for the safety of the passengers and appealed online to people with technical know-how of aircraft to further investigate the image in order to trace its whereabouts, said the report.