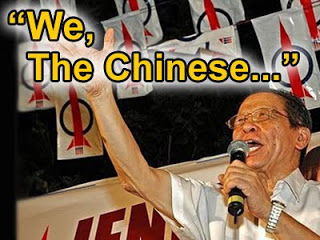 1. Kit Siang is going to contest in Gelang Patah.

3. Obviously it is because Gelang Patah has a Chinese majority.

4. Obviously Kit Siang is going to play on Chinese sentiments.

5. Johore has been an Alliance/Barisan Nasional stronghold ever since independence. The three races there have been supporting each other in elections. They do not have strong racist feelings.

6. But Kit Siang is going to bring about conflict and antagonism between the races, to wage the Chinese to dislike and hate the Malays.

7. The slogan of the DAP is Malaysian Malaysia, a slogan used by the PAP in the 1964 General Elections. The slogan implies that Malaysia did not belong to all Malaysians equally. It belongs to the Malays.

8. The PAP intended to get the Chinese not to co-operate with the Malays, to end the Sino-Malay “ kongsi” of the Tunku in the Alliance Party.

9. Kongsi means not taking all our entitlements for ourselves but sacrificing some so others may get their share. 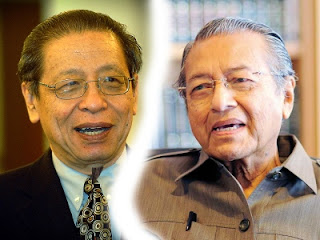 10. The PAP rejected this “kongsi” principle demanding that everything be based on merit. When Singapore left Malaysia the DAP, the PAP Trojan horse, took up the Malaysian Malaysia slogan. The intention was to draw away Chinese support from the MCA and abandon the kongsi concept with UMNO and the Malays. The meritocracy promoted by the DAP will mean diminishing opportunities for the Malays in education and in business. This will result in the Malays becoming less and less qualified and poorer. Meritocracy is not about sharing but about the winners taking all.

11. When Kit Siang decided to contest in Chinese majority Gelang Patah it is because he wanted the Chinese there and in Johor to reject working together and sharing with the Malays.

12. An unhealthy racial confrontation would replace Sino-Malay cooperation which has made Malaysia stable and prosperous. That cooperation will end when Kit Siang wins Gelang Patah. Even if there will not be violent clashes as seen in many countries where people are divided by race or religion, but confrontation between the three major races in Malaysia will be disruptive and will not be conducive to the development of Malaysia.

13. For this reason the decision of Kit Siang to contest in Gelang Patah will be the focus of the 13th General Election in this country.

14. Will the DAP end Malay-Chinese friendship and cooperation in Johor or will “kongsi” remain the bases of race relations in Johor and in Malaysia?