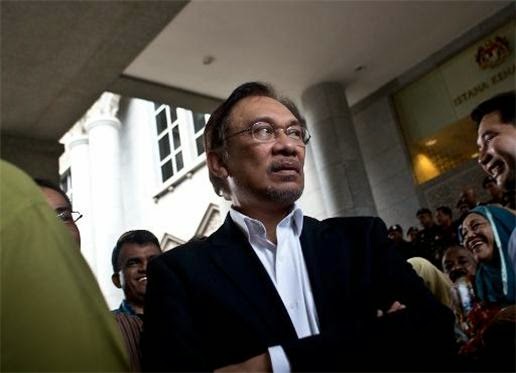 Malaysia's opposition leader Anwar Ibrahim said Monday a meeting with US President Barack Obama during a coming visit to Malaysia would have been "consistent with US democratic ideals," after Washington said there would be no such encounter.

But Anwar, who was convicted of sodomy in March and whose opposition is engaged in a fierce political battle with Malaysia's longtime government, stopped short of criticising the US president.

"I am not upset," he told AFP, but he added that a meeting would have been "helpful" and "consistent with US democratic ideals and its foreign policy of promoting freedom and justice."

US officials said Friday that Obama did not plan to see Anwar while he is in Kuala Lumpur, marking the first visit by a sitting US president to the Southeast Asian nation in nearly half a century. They did not rule-out a lower level meeting.

Obama arrives in the Malaysian capital on Saturday for a three-day stop as part of his Asia tour, which also includes Japan, South Korea and the Philippines.

Washington has expressed disquiet about what it says are politically motivated charges to keep the veteran opposition leader out of Malaysian politics.

In March, a Malaysian Court of Appeal overturned Anwar's 2012 acquittal on sodomy charges, finding him guilty of having had sex with a former male aide in 2008 and sentencing him to five years in jail.

A former deputy premier with the ruling coalition, Anwar has cultivated strong friendships in Washington, where he is lauded for his calls for reform.

The 66-year-old said there was "opposition from the Malaysian government" against him meeting Obama.

US national security advisor Susan Rice said while Obama was unlikely to meet Anwar "there may be other engagements at other levels" without elaborating.

In elections last year, an Anwar-led opposition won the popular vote for the first time, but Barisan Nasional retained control of parliament due to what critics say is gerrymandering.

An annual report by the US-based academic study Electoral Integrity Project published in February ranked Malaysia's elections 66th out of 73 for democratic integrity.