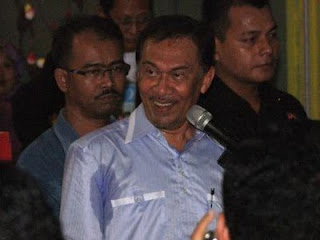 Malaysia's laws on homosexuality need to be amended, says the former deputy prime minister Anwar Ibrahim, whose conviction and nine-year jail sentence for sodomy were recently overturned on appeal.

Anwar, who spent six years in prison on a separate charge of abusing his position to cover up homosexual offenses, spoke out on what he called a 'sensitive' issue in an interview.Anwar, a popular politician who was widely expected to be Malaysia's prime minister by now, maintained, as he has done since his arrest in 1998, that the charges against him were trumped up to destroy his political career.

But while insisting on his innocence and acknowledging that most people in mainly Muslim Malaysia objected to homosexuality, he said people's privacy needed to be protected. "In the general view, among Muslims and many non-Muslims that I know, homosexuality is not accepted", he said. "Fair enough.

But here the question is, how do you use the law and intrude on people's privacy and their own private choices?" "This is the borderline. I think public display may be objectionable, but I think the laws need to be amended" ."The issue is the invasion of privacy, and we therefore have to design and make sure the law does not involve the overzealous groups trying to push their views or values outside the scope of the law". "So I think while I endorse the general law against homosexuality.

I think it is against Islamic tenets and also the cultural practice here by most Malaysians. I think we have to bear in mind that invasion of privacy is something that we need to look at." Anwar's wife, Wan Azizah Wan Ismail, is a member of Parliament for the opposition National Justice Party set up to press Anwar's cause after he was fired as deputy by Mahathir bin Mohamad when Mahathir was prime minister.

She is the only party member to win a seat in March elections in which opposition parties were defeated by the man who took Anwar's place as Mahathir's successor, Prime Minister Abdullah Ahmad Badawi. Anwar has said he bears no grudge against Mahathir.

Some commentators have attributed Bush's re-election in part to his opposition to marriage between homosexuals. "Gay marriages are going a bit too far," Anwar said. "I'm a liberal in many ways but I think that is going a bit too far."...???? 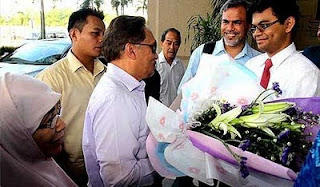 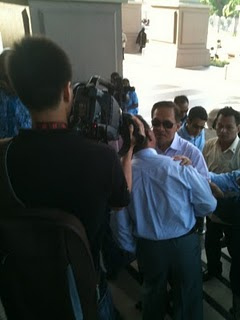